The Mornington Peninsula is best known for its world-class wineries, windswept beaches and revitalising hot springs. But it’s also the home of Good Shepherd, a highly respected Australian charity tackling issues affecting women, children and families. Tradewind Australia, who is the leading Social Work and Community Services recruitment agency in Victoria, are supporting this fantastic not-for-profit organisation to fill a number of Family Violence Social Work vacancies in this region.

Sally Jones, a Family Violence Case Manager at Good Shepherd, relocated from the UK to Tasmania.
After deciding she wanted to see more of the country outside the big cities, Tradewind Australia helped Sally secure her role with Good Shepherd. Now a Mornington resident for nearly two years, Sally can’t imagine living anywhere else.

“There are beaches and bushland and just so many places to walk and explore,” she told our Manager of Family Services, Eoin Murphy. “And it’s only a 60-minute drive or train ride to Melbourne, for those who like a bit of city living from time to time.” 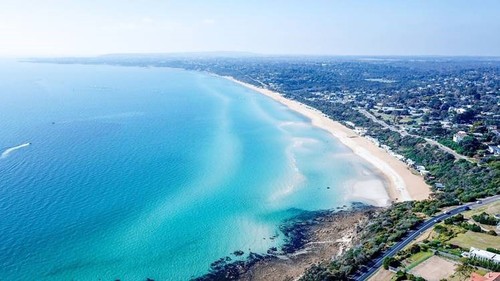 It’s not just the stunning natural surrounds that keeps Sally excited to live on the Peninsula. She’s also seen a shift in her work/life balance, allowing her to practice self-care and spend her spare time sightseeing and socialising with friends.

“Working in Child Protection in the UK, I worked such long hours, I had a long commute and had little to no work/life balance,” she said.

“I feel the two main contributors to my new and much-preferred lifestyle are living on the Peninsula and working for a not-for-profit organisation that cares about worker wellbeing.”

Family Violence Case Manager Jade Hannah, who initially came from the UK, also moved down to the Mornington Peninsula after Tradewind Australia helped her secure a Melbourne-based temp role to gain experience and subsequently supported her in getting the position at Good Shepherd. “I was initially worried about how I’d adapt to being out of the city, but it turned out to be the best decision I’ve made, and I now prefer living down here,” she told Eoin. “It’s such a beautiful part of Victoria and there is also lots to do here – many cafés, restaurants, markets, gyms, festivals, wineries and bars. It’s a very peaceful and interesting place.”

With the help of Tradewind Australia, both Sally and Jade secured a sponsorship visa through Good Shepherd. Since Tradewind Australia’s Family Services team are specialists in this sector, we were able to provide them insight into what the roles would look like and how the skill sets they developed in the UK could transfer directly into a Family Violence position here in Victoria

Eoin says there are numerous opportunities for experienced candidates in the Family Violence sector to follow in the footsteps of Jade and Sally.

“We are currently working with Good Shepherd to recruit for a number of Family Violence Case Manager jobs on the Mornington Peninsula,” he said. “Not only would candidates be working with an employer with a stellar reputation and supportive work environment, but they would have the opportunity to help some of Victoria’s most vulnerable women and children. “It’s a chance for Case Managers to apply their experience from all areas of Child Protection and Family Violence to support women and children who are experiencing family violence.”

If you’d like to speak to someone about these Social Worker vacancies and about relocating to the Mornington Peninsula, contact the Child and Family specialists at Tradewind Australia on australia@twrecruitment.com, or call 03 8689 9534 and ask for Charlotte, Heather or Eoin.